Switzerland is a country beloved by people from all over the world – tourists, athletes, artists, photographers and filmmakers. Switzerland has also been a shooting location for some famous international films: The Bourne Identity (2002), Star Wars Episode III (2005), or the legendary James Bond movie On Her Majesty’s Secret Service (1969), to name only a few. A successful Korean production was partly filmed in Switzerland too – Asian drama lovers might be familiar with the internationally popular show Crash Landing on You (CLOY). 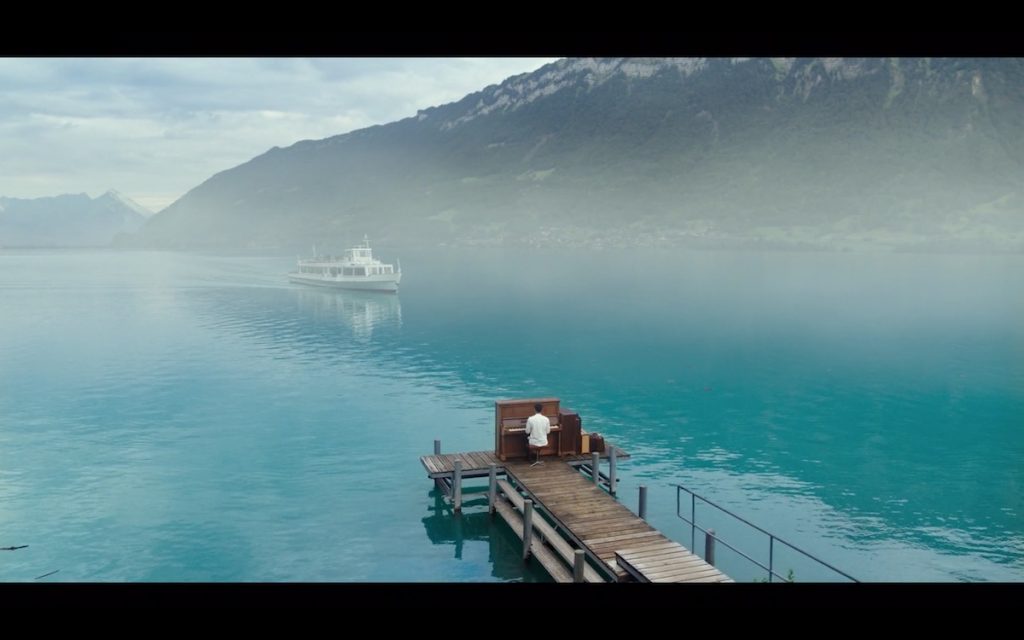 CLOY tells the story about Ri Jeong-hyeok (Hyun Bin), a North Korean soldier who was once a genius young pianist, and Yoon Se-ri (Son Ye-jin), a brilliant business woman from South Korea who was stranded in North Korea. The complexity of Jeong-hyeok and Se-ri’s relation is further complicated by political issues between North and South Korea.

Crash Landing on You got a big audience around the world addicted with its 16 episodes that were broadcasted since mid-December 2019. One of the reasons why so many people are into CLOY, besides the compelling story, must be the stunning shooting locations. Several episodes of the show were taken in Switzerland: from Zurich old town to the majestic mountain peaks in the Jungfrau area to romantic Lake Lungern – the show captures Switzerland’s variety perfectly.

This inspired us to design a special Switzerland itinerary based on the show. Yes, those breathtaking places actually exist in real life! And they can be visited. We want to cater not only to CLOY fans who wish to look behind the scenes but also to romantics wanting to explore Switzerland from a different perspective. With this self-guided tour package, you will discover the impressive landscape of Bernese Oberland as well as the vibrant city of Zurich including its surroundings.

A TV show with a captivating storyline and the Swiss Alps as a scenery will certainly make your travel passion surge. Maybe this vacation would even be the right moment to propose to your loved one and get engaged?

Are you curious about the filmed scenes and would like to explore the sites where they were shot? See here the main CLOY settings in Switzerland listed: 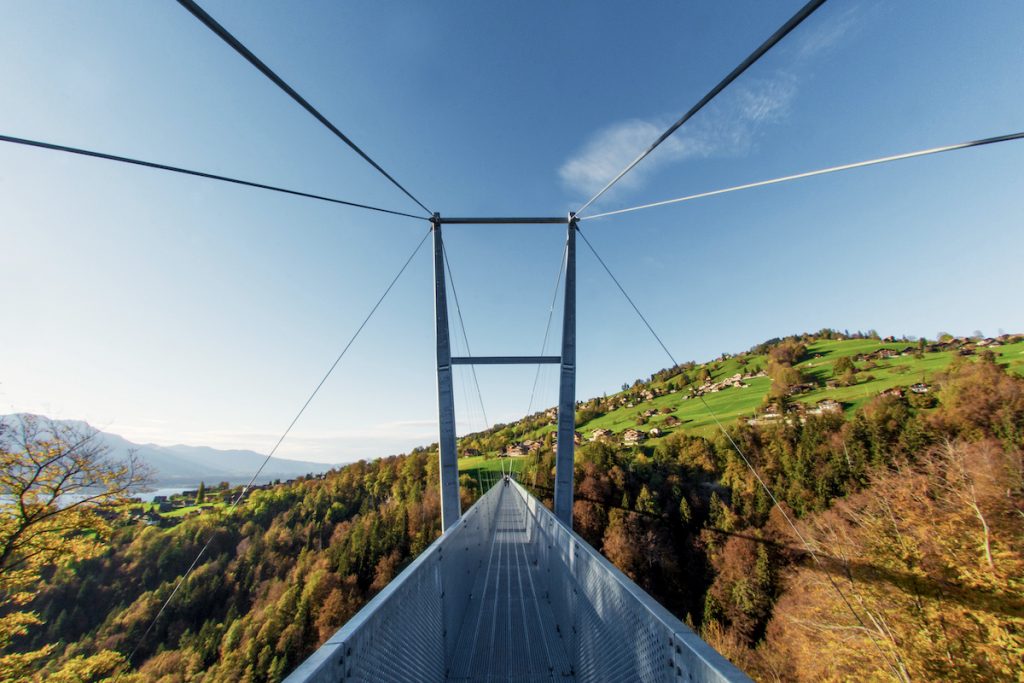 The 340 m long pedestrian suspension bridge is located between Thun and Interlaken and connects the two villages Aeschlen and Sigriswil. It offers panoramic views of Lake Thun against the backdrop of the Bernese Alps.
The suspension bridge Sigriswil is also an important location in the show – the story of Jeong-hyeok and Se-ri starts here. Se-ri intends to commit suicide by jumping off the bridge. At the same time, Jeong-hyeok and his (at the time) fiancée Seo Dan are at the bridge to visit and take pictures. Jeong-hyeok asks Se-ri to take a picture of them and walks off the bridge, so Se-ri has to follow them. At that time the two of them did not know each other. 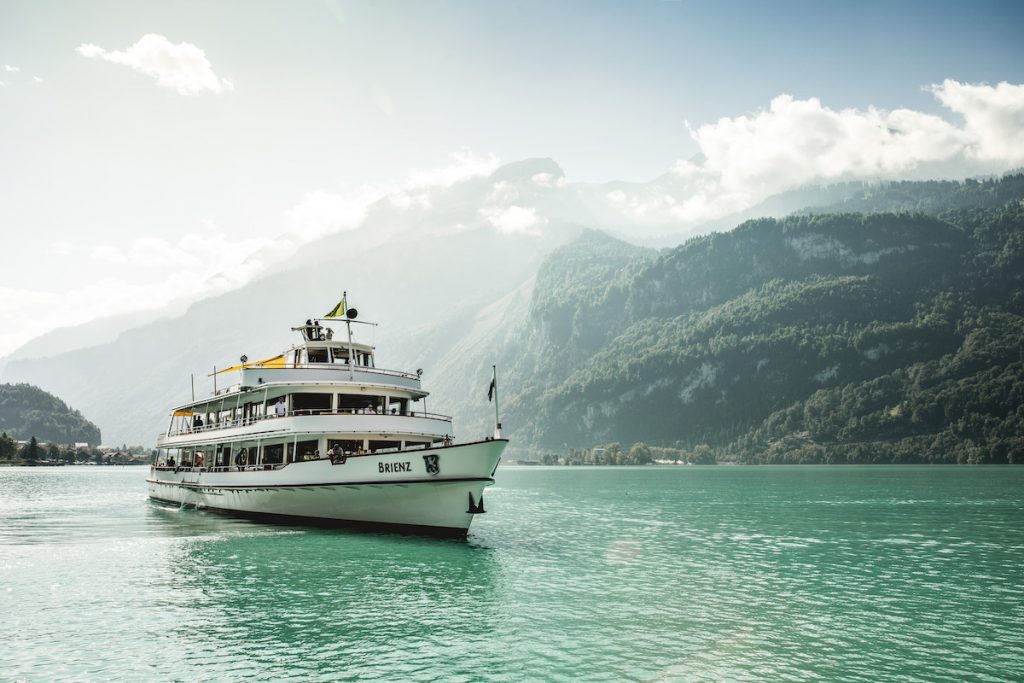 This turquoise lake in Bernese Oberland is situated between the woodcarver’s village of Brienz and world-famous Interlaken. Activities include a broad choice of water sports and boat excursions to cascading waterfalls.
In Crash Landing on You Se-ri takes a cruise on Lake Brienz, hoping that the surrounding natural beauty would be beneficial for her mental health issues. This is where she heard the song “For Brother” by Jeong-hyeok for the first time, when Jeong-hyeok played it on a small pier in Iseltwald. 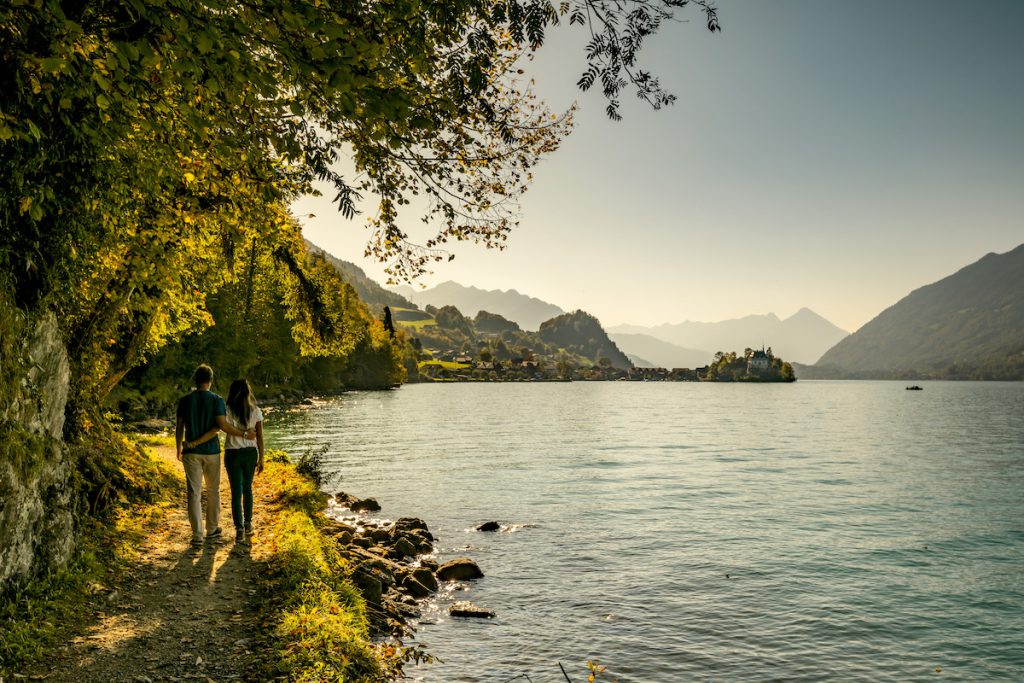 This idyllic place with traditional wooden chalets is located south of Lake Brienz and is renowned as a fishing village.
Iseltwald is one of the most important settings in the story of CLOY in Switzerland: The small pier in Iseltwald is where Jeong-hyeok played the piano for the last time before returning to North Korea due to the sad news of his brother’s death. 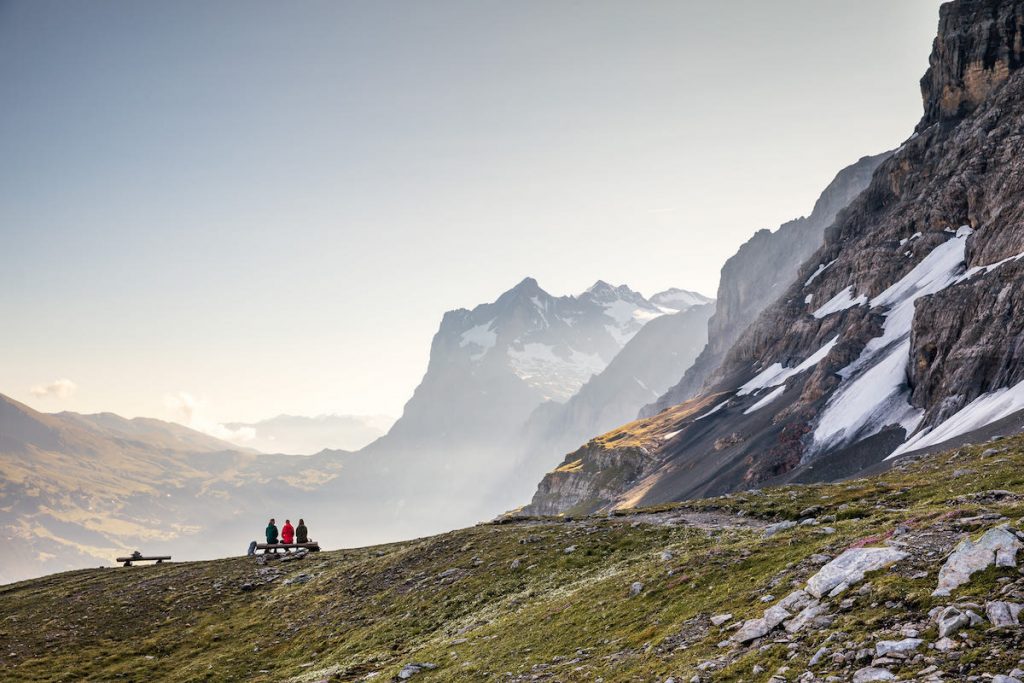 Kleine Scheidegg is situated in the middle of the skiing and hiking region and is known for its stunning views of the famous Three Peaks Eiger, Mönch and Jungfrau. The historic grand hotel Kleine Scheidegg with restaurant is also worth a visit and makes for great pictures.
Jeong-hyeok and Se-ri come to Kleine Scheidegg independently at the end of episode 2. They are in the same spot in Switzerland without knowing each other and watch paragliders drifting in the sky years before their fateful meeting in North Korea. 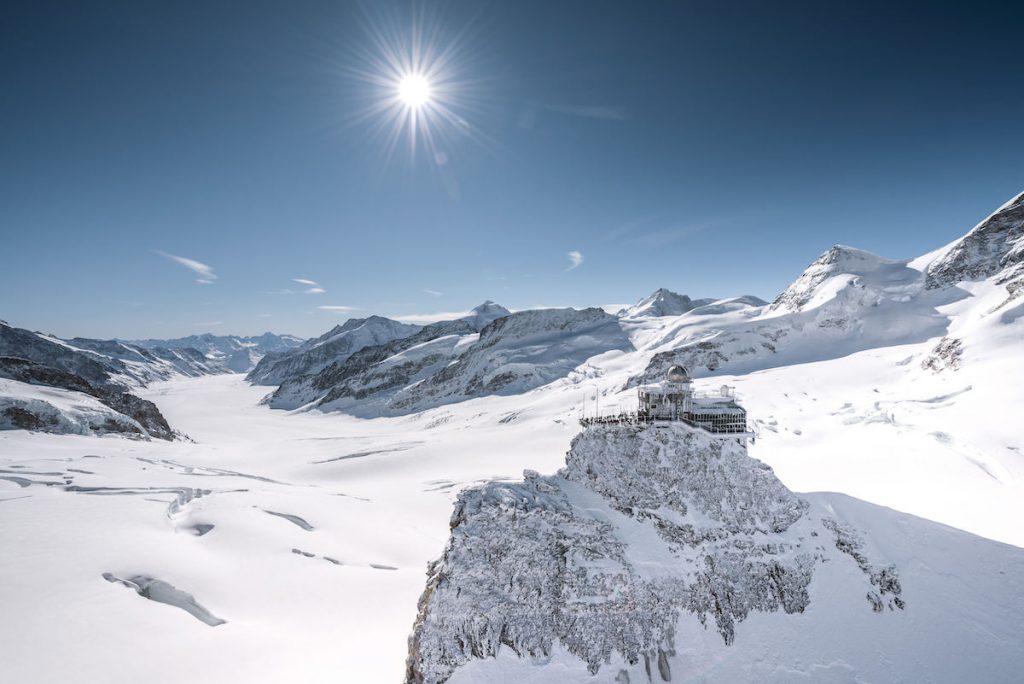 It is without doubt the most famous viewing point in Switzerland. Jungfraujoch is also known as the “Top of Europe” since it is home to the highest train station in Europe, at a whooping elevation of 3,454 metres.
In Episode 16, Jeong-hyeok and his fiancée Seo Dan visit Jungfraujoch. In another twist of fate, Se-ri happens to be sitting right behind Jeong-hyeok during the train ride. The building in the movie scene is the Sphinx Observatory, one of the highest observatories worldwide. 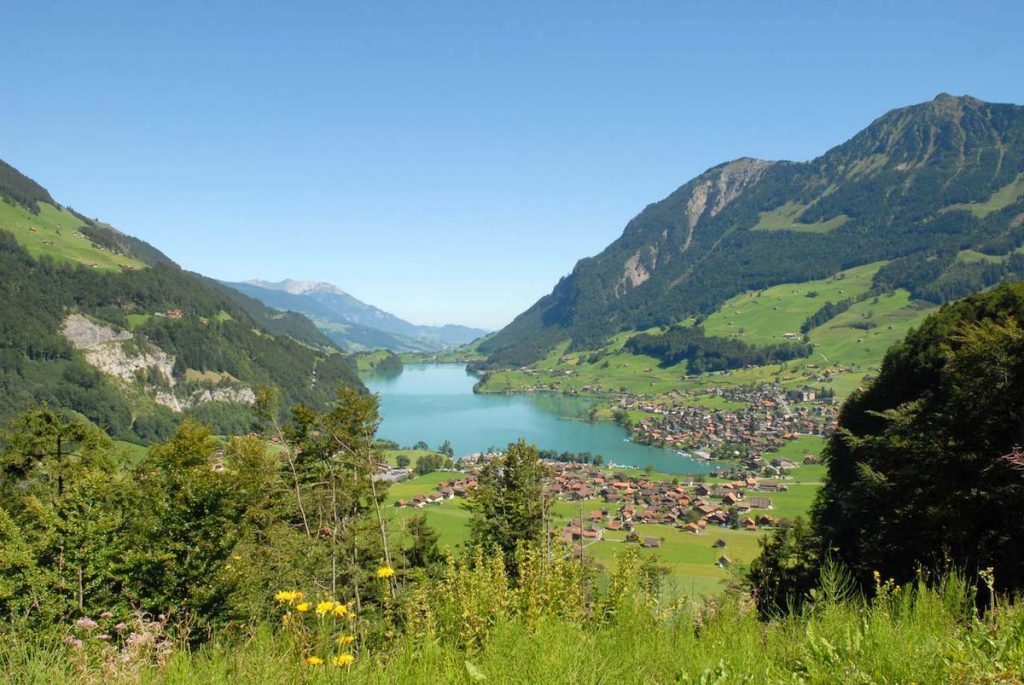 This beautiful lake is located in Obwalden, between Interlaken and Lucerne. There are plenty of things to do at Lake Lungern, such as hiking, swimming or kayaking – it is paradise for outdoor lovers.
This location appears in the very end of CLOY’s final episode: Se-ri prepares for a picnic on the meadow overlooking Lake Lungern, and Jeong-hyeok arrives. With a kiss this scene closes the romantic drama. 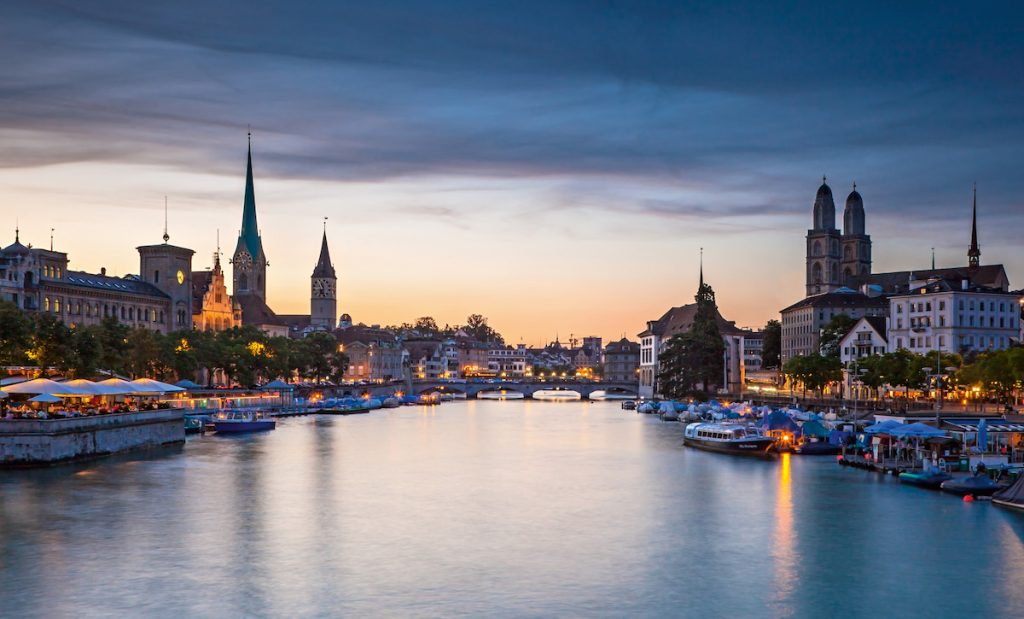 Münsterbrücke is a bridge over the river Limmat in Zurich old town and connects the two famous cathedrals: Fraumünster, famous for its stained-glass windows by Chagall, and Grossmünster with the two towers, characteristic for the city.
This bridge is being featured in the first trailer of the show: Se-ri is seen leaning on the bridge’s railing, staring off into the distance. Münsterbrücke also appears in the episode where Seo Dan visits Jeong-hyeok for the first time. 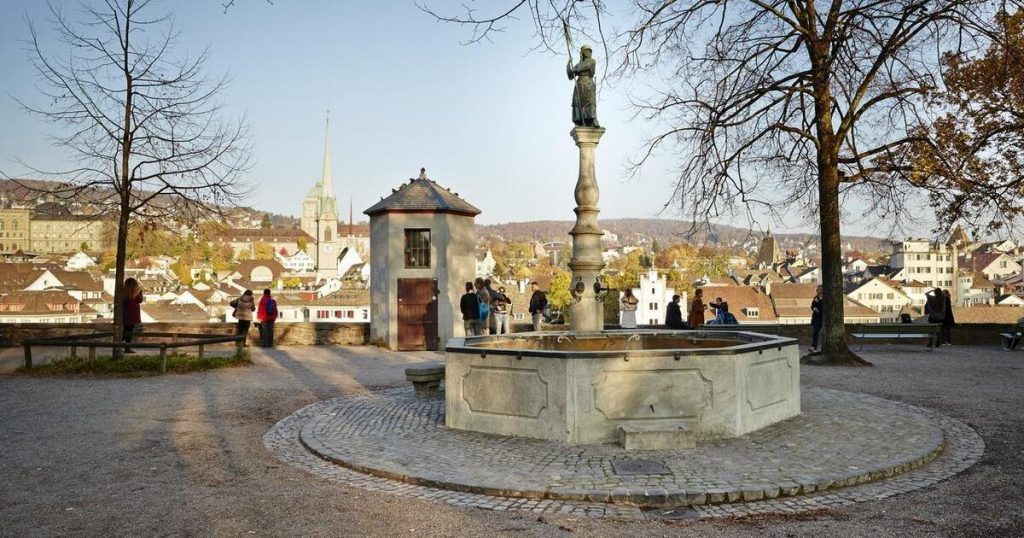 This square in the old town is not far away from Münsterbrücke. It overlooks the Niederdorf and the river Limmat. The fountain with the statue is meant to commemorate the struggle of Zurich’s women in defending their town from the Romans in the 13th century.
In one of the show’s opening scenes, Jeong-hyeok and Se-ri are seen crossing this square. It is also the place where Se-ri mistakes a pianist for Jeong-hyeok at the Lindenhof fountain.

Interested and can’t wait to follow the footsteps of the two CLOY main characters through Alpine scenery and historic cities? Let us take care of your Crash Landing On You rail package through Switzerland!